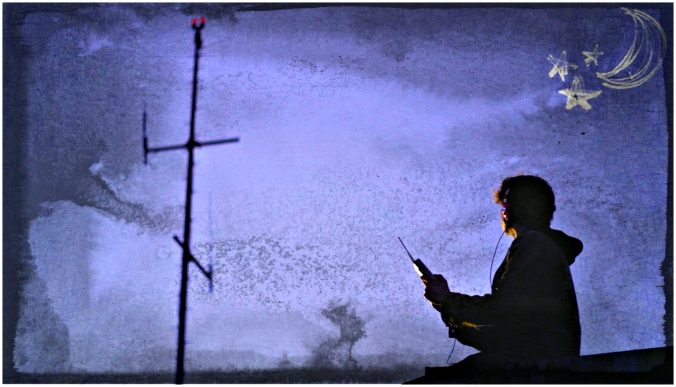 This is The Boy.  He is an Epic child, a Mythical child.  He is pure joy.  Look at him, sitting up there on his roof, gazing heavenward.  Dreaming.  Making it up as he goes.  Always climbing.  As a child he scaled whatever heights he could find.  We have the pictures to prove it:  the Boy in trees, atop statues, fences, and walls.

Now he writes songs about rooftops and soaring through space; about sailing the seas, wanting to be a pirate.  He dreams in such bold swaths of color and clarity, and with such passion, it takes my breath away.

He set this photo up of himself on his roof with a tripod and a timer.  It was still daylight at the time.  When he sent it to me I took the original and made it night, threw in some stars and a sliver of moon, because that is how I have known him best — at night.

Even as his life was forming, the wriggling/squirming/kicking came at midnight.  (Oh, how that kid could dance.)  And I was up anyway at that hour. So we introduced ourselves, and communed through the wee hours of the night.  Not for nothing, it was midnight when the labor pains began.  As though he’d decided then, Knock, knock, can I come out now?  Ten hours later he arrived with a skinned nose to mark his blazing entry into the world.  Eyes wide open.

He hasn’t slowed down a bit.

He’ll be home later today for a whirlwind stay.  He has a dentist appointment in the morning, after which, we’ll put him back on a train to where he now resides.  But this evening will be filled with music and laughter reaching into the hours when most people are long in bed.  And the stars will shine among the clouds and the moon will be there, as always.

And he’ll tell me his plans and dreams, and it will all still take my breath away.

Addendum:  The video below was made by the Boy a few years ago for a song he wrote and composed, Aurora Boreality, featuring the Boy and his band — Break Stuff, Steal Things.

26 thoughts on “On a Rooftop Dreaming”