My husband and I got diplomas in the mail a couple of days ago. In Applied Danverology. I was so proud of mine that I scanned it and posted it on my Facebook page for all my friends to see. Lots of them liked it, and some commented. More than a few were a little confused. In the interest of clarifying, AND in my perpetual promotion of the previously blogged-about Fforde Ffiesta, I will herein attempt to explain what this diploma means. (Don’t I already sound smarter? My diploma does say With Honours, after all.)

Danvering is a verb based on Mrs. Danvers, the antagonist in the book Rebecca, by Daphne du Maurier.  She’s a formidable character.  Scary, even.  In Jasper Fforde‘s Thursday Next series, she is cloned and the resulting multitude of Danvers are used as a special forces team to thwack the Mispeling Vyrus .

This is the the letter that accompanied our diplomas.  We are really happy that we didn’t have to take out school loans for this course of study.  Phew.

This is a photo of the Danvers Brigade mustering for inspection.

Please note that the The Legion of Danvers is an equal opportunity movement.  All that’s required for membership is a black dress, a grey granny wig, dark glasses, and a fearsome demeanor.  Oh, and you must learn the following marching song:

That’s all there is to it.  Follow those simple steps, spend a lovely weekend in Swindon at the Fforde Ffiesta, and you, too, might one day obtain a Higher Diploma in Applied Danverology.

You will be the better for it.  Trust me.

A couple of days ago was the first scorching hot day of the year. We don’t have central air conditioning, so in the summer my husband throws a couple of air conditioning units in a few windows and we make do. The problem is he was rushed for time and didn’t seal the window in our bedroom properly so when I went to bed I found bugs swarming through the thin opening between the window panes. They were everywhere. I tried to ignore them, and then there was this flickering light like Tinker Bell had come to tell me that Peter was in trouble – come quick – and I realized, oh, wait, it’s not Tinker Bell, it’s a firefly. And there were three of them. In my room. Like beacons. Flashing. On and off, on and off, on and off. And I knew that unless I got up to catch them, there would be no sleeping for me.

Sleep has never come easy. As a kid I was the one reading beneath the blankets with a flashlight. Early morning is not my friend. I’ve learned to cope in a world that gets started at the crack of dawn, not always cheerfully, but I try. Sometimes, though, my propensity for staying up late lurches into the realm of insomnia, which is beast of another kind. When I cannot fall asleep no matter what I do.

My husband doesn’t understand that at all. He thinks that falling asleep is simply a matter of self-discipline. I have tried to describe for him what it feels like — sleeplessness even in the face of bone-deep fatigue. It’s like there’s an electrical current running through my body that I have absolutely no control over, and there’s no switch I can flick to shut it off or slow it down. Odd thoughts and words slam around in my head, disjointed and meaningless; sometimes seemingly profound or so applicable to something I’ve been working on that I debate whether I should get up and write it down. I don’t have to be worrying about anything – other than going the hell to sleep. The insomnia is just there, waiting, in the dark, taunting me like a fiend from a horror story. Honest to God, my first conscious thought yesterday was the line: Once upon a midnight dreary, while I pondered weak and weary. . . .

And before you offer, just let me say I have run the gamut of sleep aids. Antihistamines, lavender oil, warm milk, herbal, homeopathic, ayurvedic, over-the-counter PM versions of Tylenol, Motrin, or Advil. None of it really works, or works for long. It’s annoying as hell, but I’ve learned to accept that some of us are just wired differently. It’s how we were born. In fact, who knows, maybe that’s how vampire stories got started. Maybe those people were nothing more than poor schleps who were also wired differently and couldn’t sleep at night. So they made up for it by sleeping a big chunk of the day away and were persecuted by the early-to-rise citizenry. If that’s the case, I consider myself lucky. At least no one has tried to drive a stake through my heart.

No lie, I tried to get a photo of the fireflies in my room, which was obviously an impossibility from the get-go. It just shows how sleep deprivation robs you of the ability to think logically. Besides, I like this picture of purple irises. And I’m in BIG love with Instagram.

Let’s all welcome imp the same to the blogging world. Welcome, imp.

There’s this thing I like to do:  Once a year I pack suitcases with, among other stuff, some black dresses, a couple of grey granny wigs, dark glasses, and the lyrics to “Leaning on a Lamppost.”  This year I also packed a tattered lace wedding gown and a plastic skull.  The first four years I packed for three of us – my husband, our son, and myself.  This time, it was just my husband and I, as the boy couldn’t go.  I left the mammoth and the dodo behind, too – luggage allowances and all.  You’d be amazed at how much room a froufrou wedding gown takes up in a suitcase.

My family and close friends know that this bizarre ritual is part of our trek to the Fforde Ffiesta.  Not all of them understand why we go, but they accept it.  They accept that the rest of the year we don’t go out much, we don’t visit often, because we’re always saving our money so that we can instead spend a weekend in Swindon, a smallish nondescript city in England, most noted for its Magic Roundabout.  But, Swindon is also the literary home of Thursday Next, heroine in a series of books written by the extraordinary Jasper Fforde.  And therein lies the allure.

Jasper’s books are difficult to describe. They’re a riotous genre-defying amalgamation of fantasy/sci-fi/fast-paced mystery thriller filled with wit, social commentary, and literary references.  The Ffiesta is a literary festival celebrating all things Fforde, organized by a small, but brilliant group of Fforde fans – the Fforganizers.  Attendees are passionate about the books.  They’re a friendly lot, fun and full of words, and just a little insane – but in a good way.  Having been at all five of the Ffiestas now, I am happy to number them among my friends.  There is something exhilarating about spending a sleep-deprived weekend amongst like-minded souls who totally get your dorkiness and even embrace it.  How can you not make friends with that?

The weekend was jam-packed with non-stop goodness.  There was the Friday evening pub quiz; hunt the lobsters; cipher-solving group puzzles; a village fete; a rousing game of Lobster Space Invaders; croquet (it is, after all, England); a bus tour of Swindon with Jasper as tour guide and Derek (a Fforganizer) as the mustachioed ice cream peddler; Nanowrimo hours; literary karaoke; Royal Angst poetry writing competition; Hamlet soliloquy speed-reading competition (for which the plastic skull was needed); Name that Fruit; a murder mystery performed by the Fforganizers; formation of the Danvers Clone brigade (53 members this year – a record!); fancy dress parade in which participants dressed up as characters from Jasper’s books.  And throughout the goings on Jasper was everywhere.  Reading from his latest not-quite-yet-in-print book; talking, answering questions; presiding over competitions; auction-erring; and at the end of it all, awarding prizes.  That’s a lot to pack into a weekend.  And, yet, we were all a bit sad when it was time to leave.  There’s talk of extending the time a few extra days next year, for those who can, with a group road trip.  Itinerary as yet to be determined. 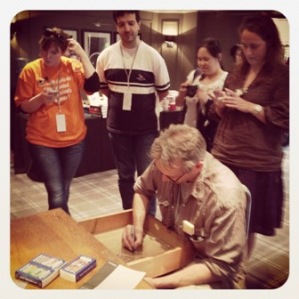 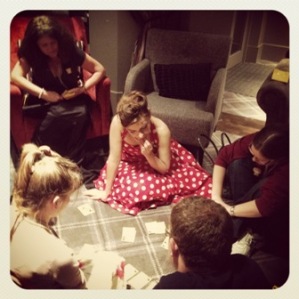