The poesy he smells is so small we can barely see it in his pudgy fist.  (We would have overlooked it — there were so many tiny flowers hidden in the grass that day.)  It is a thing of wonder to him.  As he is a wonder to us all. His curls and creamy skin, his brown eyes kissed by innocence.

See how he clutches his little dog?  What a comfort it is to to him to have it, his reassurance for the times when the world is a scary place to be. (Remember when it was that simple?)

Had you known what the future held, you might have wished to stop time, to freeze that moment forever, because surely there would never be another so perfect.  But then you would have missed the astonishing mystery of him as he grew into a man.  A child so fierce in his conviction that he damn well KNEW when didn’t want to nap, and if you tried to make him he would scream until you got him up.  You would have missed his shyness, his goofiness, his sweet, sweet laughter. His unflinching loyalty to the people he most loved.

Even between the grooves of anxiety and worry that spun the record of your relationship there was still laughter.  Moments of silliness and forgetting.  And love, always love.  A child cries and a parent wants to hold him.  That is the way of life. When that’s gone we grieve not only for our immediate loss, but for what might have been.  We grieve for the potential that will never be fulfilled.

But there is this to keep:  the memory of a sunny day and the single pleasure of watching a child smell a flower just because it’s there.  A child who was then as he will forever be.

n.b.  For my dear, dear friend Andy whose loss I feel and whose pain I share.  And for sweet Dillon.  . . . and flights of angels sing thee to thy rest. 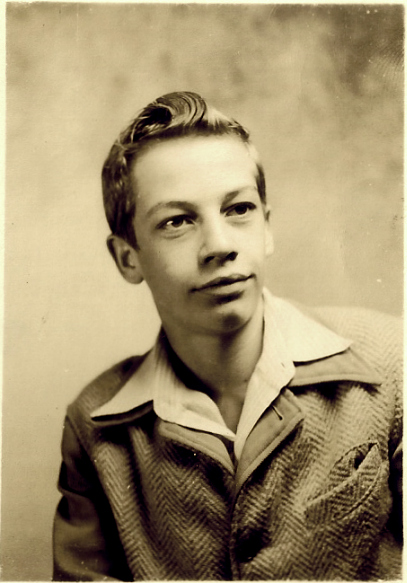 My Dad as a teenager. Even then, a sharp-dressed man.

My father is a nutball.  He cannot pass a tea shop without buying bags of loose tea.  Even though he has enough already squirreled away at home to last him into the NEXT millennium.  He buys clothes for the same reason the Kardashians do — because he loves a snappy outfit.  Unlike the Kardashians, the other part of the equation for him, means getting that new shirt or pants or pair of shoes at the lowest price possible.  There is no tickled pink like my father’s when he’s wearing something that he likes and knows it cost him less than the price of a movie ticket.

I understood from an early age that my father was different from other fathers.  It was much later that I chose the word eccentric to describe him because it seemed a more benign way of summing up a man I have struggled to understand.

He didn’t play ball or push us on swings or take walks with us.  He didn’t read us bedtime stories or tell us silly jokes.  When he wasn’t working, he was catching up on his sleep.  He could be at various times controlling, intolerant, and self-involved.  He often grew belligerent when he drank too much, which he often did.  His alcoholism ran like a ravenous wolf through our lives until the evening when members of the local volunteer fire department wrestled him into a straitjacket and drove him to the St. Lawrence State Hospital.  I was nineteen at the time.

There are no Father’s Day cards for that.

He was a complicated man.  He pinched pennies and bought food and shoes and blue jeans in bulk to feed and clothe seven children who grew faster than his wages.  He locked up the extras and doled them out as needed.  He became proficient at hording.  (So much so that he cannot break the habit decades later even though he lives alone.)

For a while he had friends.  Guys he grew up with and worked with and stopped at the hotel with to have drinks.  But, he was also kind of a loner who stayed up late reading on nights when he wasn’t working.  He believed in education.  And penny-pinching as he was, he surprised us once by bringing home a complete set of music appreciation records that taught us about Brahms and Mozart, Gilbert and Sullivan, folk music, gospel, and jazz.

He insisted on listening to classical music on Sunday, and going to church, and sitting down to big Sunday dinners.  He was so fond of Christmas that he let us eat candy all that day.  When his father died he cried openly.  When my baby sister Susie died at two days old he cried openly.

Once, in a moment of light heartedness, I plunked myself on my father’s lap and I hugged him.  He looked at me and said, What do you want? As though I had an ulterior motive.  I jumped up, stung.  But even as my teenage self bristled at his remark, I knew — I’d seen the look in his eyes and understood it — the hug had pleased him.  He just didn’t know how to accept it.

And therein lay the crux of my struggle:  Angry as I could be at my father for his meanness, I somehow sensed that he loved his children, even when he couldn’t articulate that love.  I sensed that the person he was most disappointed with was himself.

For a few years I wore braces.  On those trips home from the orthodontist’s (more than an hour’s ride away), in the lull of the drive and the comfort of a few drinks in him, he shared his thoughts with me on life and the world around us.  For a brief time he talked to me, not as a kid, but someone he could trust.  He told me what his dreams had been, what he believed in, what he wished he still could be.

My father is a sober man now.  He has been for more than 30 years.  But conquering his alcoholism didn’t vanquish every demon that possessed him.  A few remain.  He still wants things the way he wants them, and he can still be maddeningly self-absorbed.  But last year, when my son graduated college, my father was so excited that he drove from his home in rural northern New York to Amherst, Massachusetts to attend the graduation, without a cell phone or a GPS, both of which he refuses to own.  He left somewhere around 4:00am, to give himself time in case he got lost (he did), and made it to the college with just minutes to spare.

He is still a complicated man.

There are so many kinds of fathers, and Father’s Day cards are not made for all of them.  Sometimes we just have to make one of our own.

Because it’s Monday, I’m linking up at Mod Mom Beyond Indiedom where you can find a tantalizing array of other blogs.  Check it out.

It started because we all wanted a seat on the couch.

As is often the case in large families, there weren’t always enough places to sit.  The living room in our house had enough space for two large arm chairs and a couch.  My parents got the arm chairs, we kids had to fight for a piece of the sofa.  We could squeeze four of us without touching — a key element to relatively peaceful TV watching.  That left three kids on the floor.

Like all good families we had rules.  Number one rule on TV night:  if you were lucky enough to get a seat on the sofa (first come, first served), you were good.  But, if you got up for anything you HAD to say, “I get this seat when I get back.”  And say it loud enough to be clearly heard.  Otherwise, you lost that prime spot to the quickest kid on the floor.

We were a scrappy, contentious lot, but we were honorable.  As long as you played by the rule, your place would be waiting after you went to the bathroom or got your drink.  If you forgot to say the phrase, though, all bets were off.

Surprisingly, there were plenty of times that one of us would forget, and we would try to wheedle our way back into that still-warm spot, hoping that everyone else had missed the fact that we hadn’t said anything.  But there was always someone who knew you hadn’t and an argument would ensue.

One night my father put his foot down.  He forbade us to say “I get this seat when I get back”.  Never again, he said.  My father always meant what he said.

This was a problem.  We would no longer have a modicum of control over where we sat and for how long.  Without our rule there would be constant seat stealing and chaos.  What were we to do?

. . . . and yet a true creator is necessity, which is the mother of our invention Plato wrote in The Republic.  Plato was a pretty smart guy.

In our case, necessity led to the invention of mongwa.  My brother Jaime its creator.

We slipped that word into the matrix of our family life so smoothly my father didn’t notice at first.  One word is so much shorter, ergo, less noticeable than eight.  By the time he did notice, I think he actually thought it was pretty clever, so the word stayed.  It moved beyond the living room and into the kitchen, the dining room, the porch steps — any situation where there were more people than places to sit.

Decades have rolled by since mongwa entered our lexicon.  Now it’s as much a part of our family as our DNA.  We all still use it, though its necessity is seldom the point.  It’s a secret handshake, a wink, a nod.  An acknowledgement.  We were kids once in a fractious family and we lived to tell the tale.  Most of us.  Two brothers are no longer here.  Still, they were part of it and saying mongwa brings it all back and we are kids again.  We remember.

But every once in awhile it still means the same thing.  I get this seat when I get back. 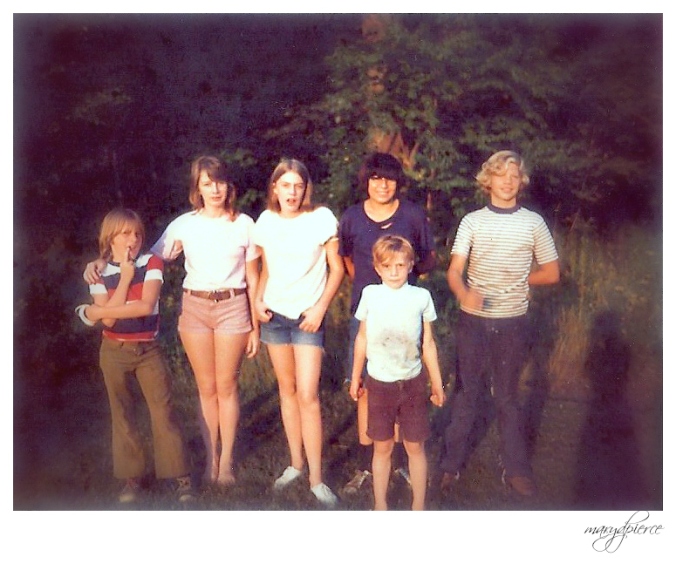 This was taken about the time mongwa was invented.  Only six of us posing. Our word creator is the last one on the right with blonde wavy hair.  One sister is missing – she’s probably taking the photo.

Filed in: Weekly Writing Challenge: A Manner of Speaking