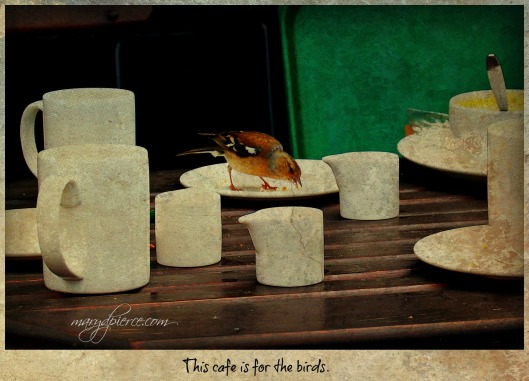 The picture has nothing to do with the post, but I like the insouciance of the little bird eating off the plate. I’m also a painter who doesn’t paint anymore because of the chemicals, and I like that I can take a photograph and manipulate it to look ‘kinda’ like a painting.

I am not a resolution person – I am a word person.  Word.  (Used by itself, word becomes an affirmation, which means I effectively just agreed with myself.)  I don’t believe in starting a new year with self-promises of giving up chocolate or swearing, or that I will exercise more, write more, and generally be a better person than I was the previous year.  Not that there’s anything wrong with people who do want to begin anew that way.  It’s just not for me.   So I was thrilled last week to read a blog post (by the lovely Jennifer Flint) that offered something different:  instead of making resolutions, choose a word.  The idea being that you think about what you would like to change in your life and find a fitting word that will inspire.   It’s not about trying and maybe failing, it’s about having a consistent source of inspiration.  I like that idea.  A lot.  And so, after careful consideration, my word for 2013 is:  RISE.  I’ll let you know next year how it worked out for me.

I liked this year.  Sure there was a lot of no-good-horrible stuff that happened in the world, but sadly, that’s always going to be the case, and you try to keep your head above it and do what you can to make it better or more bearable.  On a personal level, though, my son graduated college, found a job he really likes; my husband is finally able to drive the 1936 Dodge he’s worked so lovingly on restoring for that last decade-and-a-half; and I learned some important things about myself.  I also got an iPhone, which brought me back to photography.  And I’ve been writing.

One of the things I like about this time of year is looking over all the best-of lists, and the year-end round-ups in various magazines.  I have a terrible memory for events in time as it happens, but I find that if I look back at it in photos and/or read about it, things stick better in my head.  Someone recently pointed me to Google’s zeitgeist site.  God, I love the internet.  My only wish is that Al Gore would have invented it sooner.  It would have made homeschooling my son a lot easier and cheaper.

And what of the salmagundi?  Like revenge, it’s a dish best served cold.  It also means mixture or miscellany, like hodgepodge, which is the word I originally intended to use as a means of corralling my thoughts for this post.  But salmagundi is cooler.  Don’t you think?

My wish for today and tomorrow, is that we go fearlessly into the new year with spectacular results. Happy 2013, y’all.