I live on the southern coast of Rhode Island, so when we heard that a major snow storm was headed our way, we prepared ourselves.  We went to the store two days before Nemo’s arrival, we filled the cars up with gas.  We bought plenty of bread and milk.  And wine – because this woman does not live on bread and milk alone.

Friday morning my husband went into work early so that he could leave early, before little Nemo grew into a bigger, meaner fish.  I made meatloaf with baked potatoes and vegetables, because, if you’re going to be stuck inside for a few days, you want your belly full of comfort food.  And chocolate.  And wine.

Nemo as seen through the window Friday evening. Looks lovely, almost magical, though you can’t hear the wind roaring, nor the tree branches scratching at the windows.

The wind began to howl.  There is something about the ferocity of that sound that fills me with anxiety.  The lights flickered.  We were prepared to lose power, though we hoped we wouldn’t.  (Our electrical line taps into the main line on a grid, so that in the past, when we lose power, we’re generally the first ones to get it back.)

But the power stayed on.  Which meant I could watch CSI NY.  The second of a two-parter, AND a crossover from the CSI set in Vegas a few nights earlier, I was really looking forward to watching Mac Taylor and D. B. Russell race together to save Mac’s girlfriend.  A glass of wine, my love beside me, and a favorite TV show.  Blow, Nemo, blow.

Alas.  To paraphrase my birthday pal, Robert Burns:  the best-laid plans of mice and ardent CSI fans are often thwarted.

Do you know what happens when mega storms hit?  Every local TV news station usurps air time with constant coverage of the storm (except for insertion of all the usual commercials, naturally).  They tell you important stuff like, it’s really nasty out there, don’t go outside, stay off the roads.  And to prove how nasty it is, they send news teams out to drive the hazardous roads so they can film the wind and the snow.  They point to the banks left by plows.  “See if you can get a shot of that,” one reporter says to the camera person, as the snow swirls furiously, making it impossible to see much of anything.  “Look at how high the snow is there.  I don’t know if you can really tell, but it’s high.”  They tell you how many homes are without power.  That number increases rapidly.

To be fair, there are probably a lot of people who do want to know – constantly – what’s happening during times like this.  It may reassure them that everything is under control.  I am not one of them.

We had options, though:  DVDs and books, board games, candles, flash lights with extra batteries, heat, and running water.  We made it through the night.  We did lose power twice for short periods.  We were fortunate.

Aftermath – shoveling out. Not so fun. 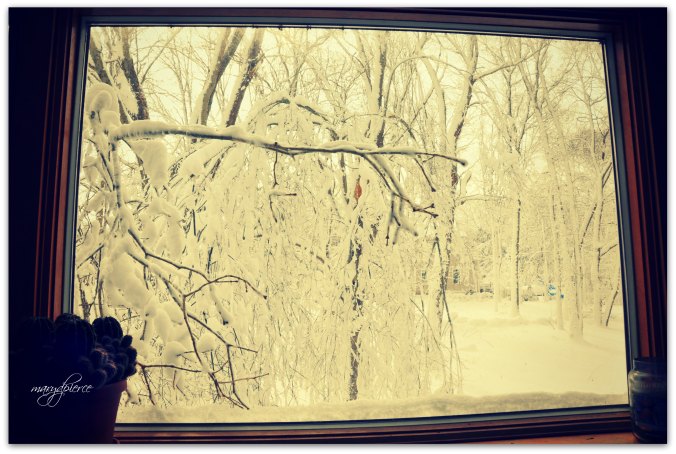 The snow-shrouded branch pointing at my kitchen window in the morning was actually touching the glass. Made me think of a blink angel getting closer and closer. . . .

My husband has managed, with the help of our kind neighbor and his snow-blower, and an anonymous good Samaritan with a backhoe, to dig us out.  We still have lots of comfort food – I’m making a beef with red wine stew next.  And chocolate chip cookies.  Later, I may go see if I can find the CSI NY episode I missed online.  Even if I don’t, it’s all good.

For those of you who were also in the path of Nemo, how did you fare?  I’d love to know.